Total Momentum
Newton’s 1st Law states that when no external force is acting on an object, its momentum does NOT change.
This applies to systems as well.
A system with two bodies (e.g. 2 balls floating in space) will not experience a change in NET momentum if there is no external force.

Let’s say both of these balls were in motion towards each other.
They each have a different momentum initially.

Once they collide, they will both experience a CHANGE in momentum.
Both balls exert a force on each other.
However, there is NO external force acting on the system as a whole.
Thus, the NET momentum of the system CANNOT change.

Principle of Conservation of Momentum
“If no external force acts on a system, the total momentum of the system is conserved.”

One-Dimensional Collisions
Collisions where all objects travel along the same axis.
In this case, the momenta are all linear, & can be dealt with algebraically.
No vector addition needed.

Two-Dimensional Collisions
Sometimes, your objects will NOT be travelling linearly.
To solve these problems, you need to apply RESULTANT VECTORS.

REMEMBER that the vectors represent the MOMENTUM (mass x velocity) of each object, NOT the velocity.

To find TOTAL momentum, there are 2 methods you can use:

To find values such as MASS or VELOCITY of one of the objects, just remember that p = mv.
If you can find the momentum of an object, you can find mass or velocity as long as you’re given the other value.

Now that we have seen the methods to calculate momentum & velocity in a collision, let’s explore the TYPES of collision.
There are 2 types of collisions: Elastic & Inelastic.

What are Elastic Collisions?
Collisions where TOTAL KINETIC ENERGY is CONSERVED.
In an elastic collision, the total kinetic energy of a system before the collision & after are EQUAL.

This means that there is NO loss of energy via heat, sound, or deformation.

*Here’s the proof (from Redefining Knowledge): 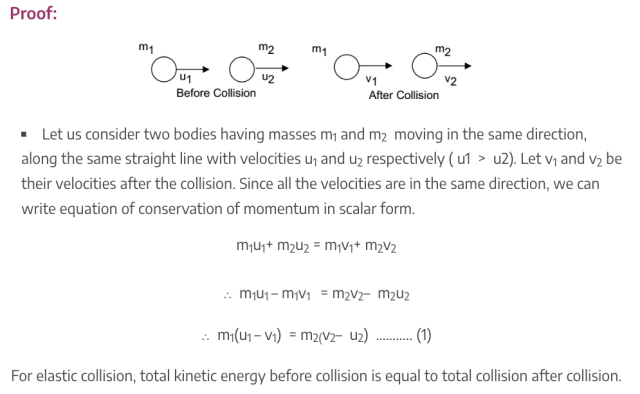 What are Inelastic Collisions?
Collisions where total kinetic energy is NOT conserved.
Some energy is transformed into sound, heat or permanent deformation of the object.
All of the above equations do NOT apply here.
However, the principle of conservation of MOMENTUM still applies.

In reality, most macroscopic collisions are inelastic.
The only TRULY perfect elastic collisions occur on a MICROSCOPIC scale: atoms & particles colliding with each other.

Here’s a summary of the characteristics of each collision:

Lastly, there’s one more type of event where we can apply the principle of conservation of momentum: EXPLOSIONS.

What is an Explosion?
A situation where two or more objects initially at rest suddenly gain momentum.

E.g. the firing of a gun:
The bullet & the gun are initially at rest, but after the explosion, both gain momentum in opposite directions – the bullet is shot, & the gun recoils.

Although each object gains momentum, the NET momentum must ALWAYS be conserved: it remains 0.
This is because all the objects move in opposing directions.
If you calculate each momentum as a vector, & add all the vectors together,
the sum MUST be 0.

One thought on “PHY C4: Momentum”