The syllabus requires us to know about:

I’ll only cover the last 2 sub-topics, as the instruments are quite straightforward in operation. Perhaps later I’ll edit this post & explain those. For now,

Instruments can display measurements in either analogue or digital form.

What is an Analogue Scale?
A physical scale that displays measurements using a pointer or another physical object.
Analogue scales are subject to an uncertainty of HALF of the minimum scale of the instrument.

What is a Digital Display?
An electronic display that displays digits.
Digital displays are subject to an uncertainty of the last digit on the display.

What is a Calibration Curve?
A graph of the:

For example:
Let’s say you have an ammeter measuring the current flow in a circuit.
If you would like to calibrate the ammeter, or check its accuracy, you can measure multiple known current values & plot a graph of Displayed Current against True Current.
It might look like this: 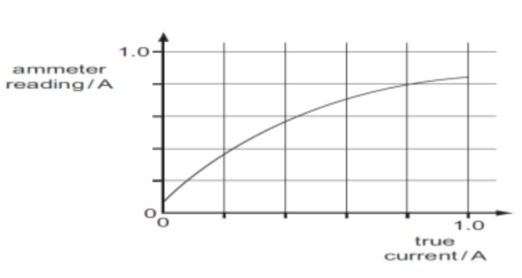 However, let’s take another ammeter, which doesn’t have a preset scale.
All you can tell is that the pointer deflects a certain length when a certain current is measured.
Thus, if you would like to calibrate this ammeter, it is suitable to draw a calibration curve of the Deflection of Pointer against True Current instead.
It might look like this:

When the scale is calibrated on this ammeter, the larger numbers would appear closer to each other than the smaller numbers. This is because the deflection is LESS per ampere as the current increases.
The scale might look like this:

One thought on “PHY C2: Measurements”